Graphical User Interfaces (GUIs) in haskell are frustrating. It's not yet clear what is the cleanest model for fitting GUIs into functional programming. Currently there are two main approaches:

Whilst enticing, the FRP approach doesn't currently look appropriate for building rich GUI applications. wxHaskell and gtk2hs at least provide the functionality required, but the low level imperative approach based in the IO monad is tedious to a fluent haskell developer. Here's a code snippet:

It's not hard to write this sort of code, but it is tedious, especially considering the amount that is required to build a whole application.

This post outlines my experiments to reduce the amount of imperative code required for GUIs, yet retaining compatibility with the imperative toolkits. Initially I've been focussed on "value editors" (VEs) aka "forms". These are GUI components to capture/edit values of ideally arbitrary complexity. I've two key goals, composability and abstraction.

Composability: I want to be able to compose my value editors effortlessly. Whilst the existing toolkits let you compose widgets using containers and glue code, it's verbose indeed.

Abstraction: I'd like to define my VEs independently from the underlying toolkit. But I'm looking for something more than a thin layer over the existing toolkits. I want to define my VEs in terms of the structure of the values involved, and worry about the formatting and layout later, if at all.

If we take this abstraction far enough, it should be possible to reuse our structural VEs definitions beyond gtk2hs and wxWindows. For example, a JSON generator+parser pair can be considered a VE - in the sense that to edit a value, one can generate the json text, edit the text, and then parse to recover the new value. Of course, it's likely to be a balancing act between abstraction and functionality - we'll have to see how this pans out.

And here's an example usage for a simple data type:

This captures in some sense the abstract semantics for an editor of Person values. We need to capture:

and know how to pack/unpack these into a person value.

But what can we do with this? We need to turn this abstruct VE into a concrete UI. There's a library function to do this for an arbitrary VE:

The uiGTK function turns our abstract VE a into GTK component for editing a value of type a. In addition to building the compound widget, it gives us functions to:

A higher level function constructs a modal dialog to get a value of type a from the user. 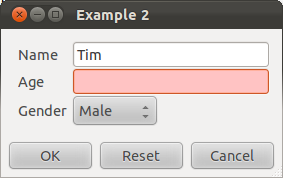 The automatically generated dialog is simple, but quite functional:

More complex UIs are of course possible. As should be clear from the VE GADT above we support sum and product types, lists, etc, and can map these with arbitrary code. Hence we can construct GTK UIs for a very large range of haskell values. A slightly more complex example composes the previous VE: 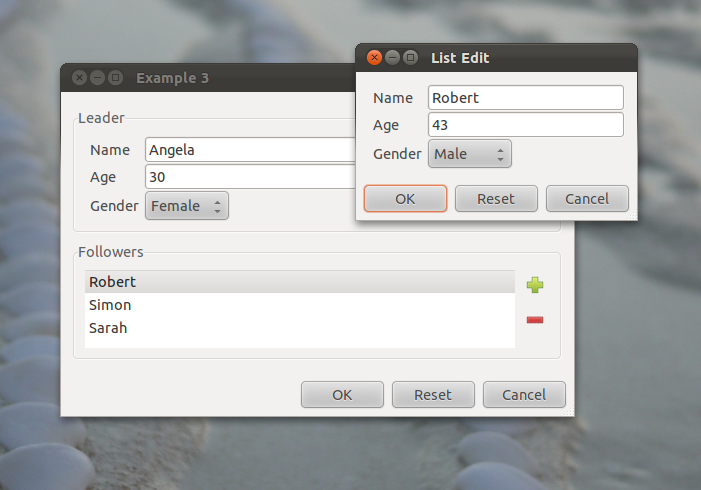 Recursive types are supported, so its possible to build GTK VEs for expression trees, etc.

As I alluded to previously, given VE a, we can automatically generate a JSON generator and parser for values of type a:

Well into working on these ideas, I was reminded of two somewhat similar haskell projects: Functional Forms and Tangible Values. Functional Forms aims to ease the creation of wxHaskell dialogs to edit values. The exact purpose Tangeable Values is a little unclear to me, but it appears to be about automatically generating UIs suitable for visualising function behaviour and exploring functional programming.

Currently I have a library that implements the VE GADT to automatically build GTK editors and JSON serialisers. There's many ways to progress this work. Some of my ideas follow...

Whilst the generated GTK editor is a sensible default, there are only very limited ways in which the editor can be customised. I envisage a model where the uiGTK function takes an extra parameter akin to a style sheet, given extra information controlling the UI layout and formatting, etc.

I can envisage many other useful things that could automatically be derived from VE definitions:

Finally, It might be worth investigate whether the GHC Generic mechansism might be used to automatically generate VE definitions.

So there's plenty of directions this work can go, but right now I want to put it to the test and build an application!